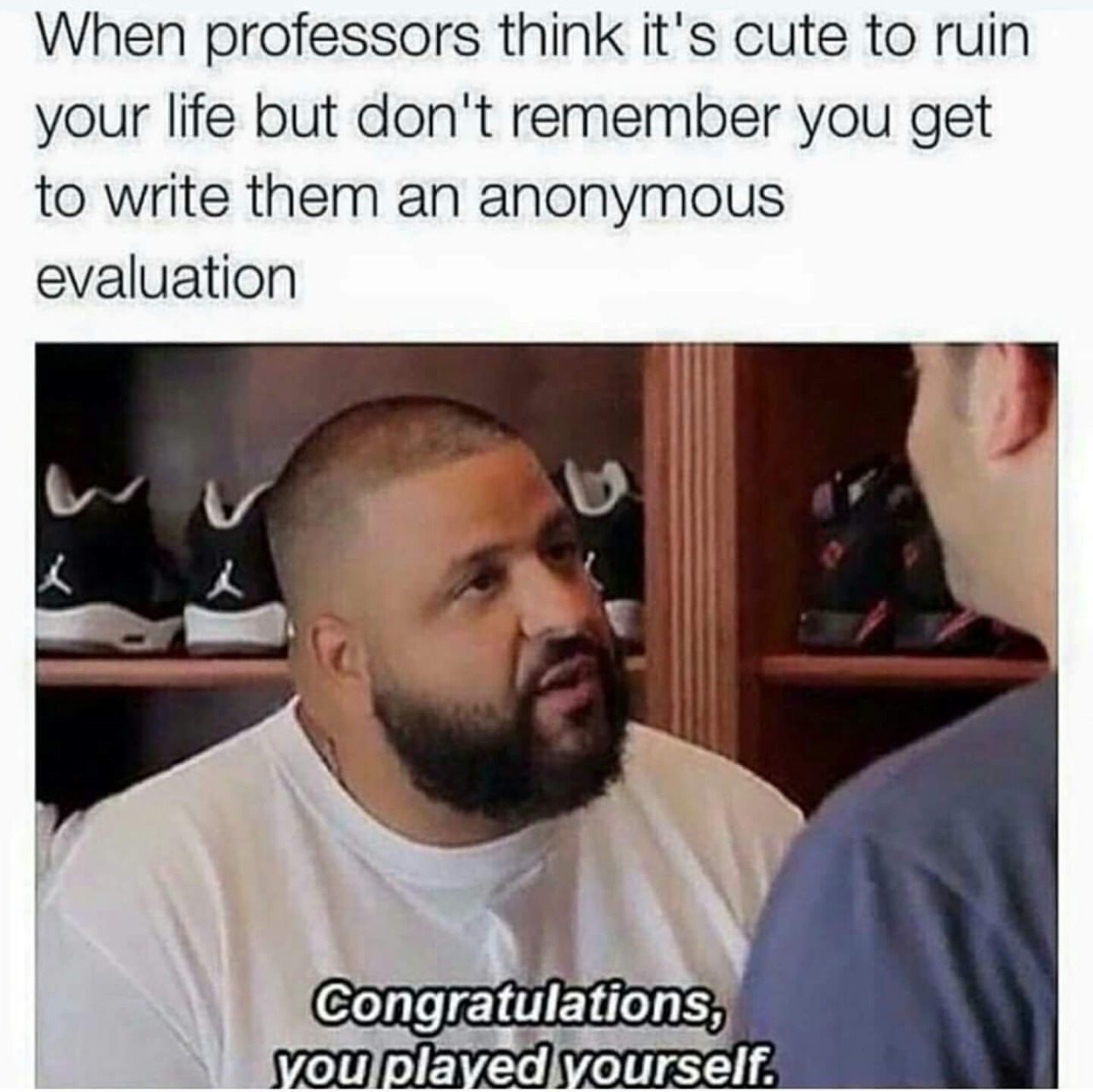 [Image text: When professors think it’s cute to ruin your life but don’t remember you get to write them an anonymous evaluation:

Congratulations, you played yourself.]

Fun fact: the evals at the end make no difference at all.

If your teacher is terrible, you can talk to the higher-ups in the department and let them know that there is a serious issue.

I had a professor who was downright abusive, so I pretty much wrote an essay in my eval. He still has a job.

Very few of my students did their evals. I didn’t get to stay on because of budget cuts. But one of my students writing a nasty letter about me in the middle of the semester did far more damage to my position in the department than a couple of “she treats us like children” notes at the end of the semester, because those are mixed with the good reviews about how I legitimately cared about my students.

I found out a month before the end of the semester that I had no chance.

Trust me. If it’s important and terrible, then you NEED to talk to the department earlier, or they’ll just go “It can’t have been that bad if they waited until the end of the semester to tell us this.”

Telling them while it’s happening will make a much bigger impact, especially if you make your plea in person. Do it in person, but be prepared to talk about everything that’s going on. Be honest and open.

If that doesn’t work, take it to the dean. That’s obviously not what you should do first, but it may come to that. Stand your ground if your professor is trying to ruin your life.

Step 1: Talk to your professor, honestly and openly. Tell them in specific terms how their actions/words are affecting you. If it is something that’s causing you physical or emotional harm, then you need to tell them that. Skip to Step 2 if you are afraid of your professor and do not feel safe talking to them one-on-one.

Step 2: Talk to someone else in the department. If you’re not sure who, go to the front office and ask them who you should talk to if you’re concerned about how a professor is treating you.

Step 3: If talking to this other person in the department does not make the situation better, then go to the dean. Deans get stuff DONE. They do not want to have to deal with BS, so they’ll work quickly to alleviate the problem.

I really must emphasize that you should talk to the teacher in question–one-on-one–about the problem. Making a general complaint during or after or before class is easy to brush off. Go to their office hours and talk to them in person, one-on-one. If you are, again, honest and open, it will help. Don’t say stuff like “this isn’t fair” or “I have too many other classes.” Just get to the point.

Never, ever tell a professor that another class is a priority over theirs. EVER. It will not go well in any way. Just don’t do it.

Bring index cards if you’re nervous and think you might forget your main points.

If you still don’t feel confident, try stopping by the counseling center on your campus, if you have one available to you as a student.

Whatever you do, do NOT wait until the end of the semester and just write a note or something. DO SOMETHING ASAP if there is a real, legitimate problem.