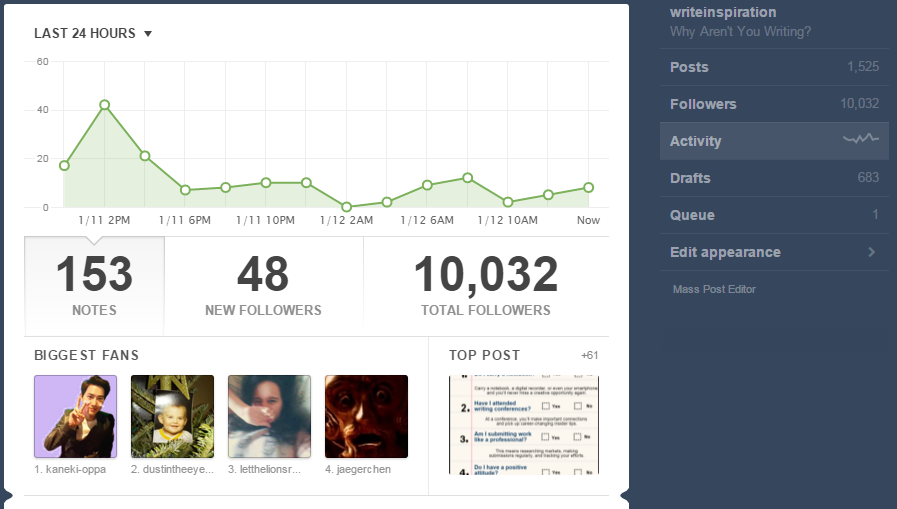 *pulls out abacus and moves the little beads around*

How… how is this even possible???

I never dreamed that something like this could ever happen.

When I first began this blog, I managed to get a few people I know to follow me. A few others found me somehow.

For close to a year, all I had was 19 followers.

I tried to post at least once a week, with a long post, a photo I’d taken, and a writing prompt based on the topic of the post.

It took forever, but I lovingly hand-crafted each one.

Then I ran out of photos that I felt like using. And it just kept going further and further downhill until I ended up taking a few months off.

I learned some stuff about the tagging system and made a few writing friends on Twitter.

And from there, I only went up.

writinginbedagain has proved to be one of the most valuable people I’ve ever spoken to. When she shared a couple of my posts, I actually began to gain followers.

And I never stopped.

Then we crossed paths again at another important crossroads for me–it was through her that I began to freelance.

Nearly a year later, my life has changed in the most miraculous of ways.

By beginning to freelance last year, I have been able to support myself–granted, it’s pretty minimal–through editing and writing full-time.

Look how much I’ve done in just a year:

Where can you find me?

This time last year, I was in a full panic. The spring semester of my last few months of grad school was about to begin.

Fall had been rough. But I made it out alive and felt pretty good about things.

But spring brought a hundred new challenges for me. It was my second semester of teaching English 100, and my thesis due date and oral exam were coming up faster than I could have ever imagined.

I’d just started on a new medication–just 10 months before I finally got diagnosed with Fibromyalgia.

I had editing of my thesis to do, and I kept changing my reading list for my oral exam, to the point that there was a discrepancy on at least one book per committee member (3 committee members total) when it finally came time.

I had two classes a day, and my schedule had been massively messed up at the last possible second. I was unexpectedly teaching an early-morning class, which was at a time when I don’t particularly function as a human being.

Plus, my new medication was making me a bit drowsy because I wasn’t giving myself enough time to eat with it.

About 15 minutes into the first class of the day, my head began to feel fuzzy. I was having a hard time remembering what I’d already said that class period. The second class was a bit better, but I began to blur the two classes together to the point where I didn’t know which things I’d told which class.

It was pretty early on in the semester when they started being uncooperative. My college was known for never, ever having snow days. We ended up losing a week-and-a-half of classes.

I had to reschedule everything, and by the time they turned in their first paper, I was knee-deep in reading and studying and slowly being unable to fit into my clothes.

I was a downright disaster by the time April rolled around.

One of my students tried to get me fired.

My studying and reading paid off, and my oral exam went wonderfully.

I renewed my lease a week or two before then and was fully anticipating to continue working at my college as a part-time instructor, as many of the former grad students do.

It had been about a month since renewing my lease that I was finally able to talk to one of my supervisors about the student who wanted me fired, and I was told “I wouldn’t count on it” when I asked about being hired after I graduated. There had been a slight attendance drop, and they couldn’t afford to bring in new people.

I graduated. And I was told that I needed to pay for my own rent since I wasn’t in school anymore. After all, I’d just renewed my lease for a year.

So I started hustling.

Within two weeks, I had started working with writinginbedagain for some blog posts and editing a client’s website for his new tea product.

A month after that, I landed my writing job at Gamers Decide.

Not long after that, I started working on Fiverr.

Since then, I’ve been helping my tea client edit his books, and I have a consistent client on Fiverr.

I still felt like I wasn’t getting enough for rent, so I made an account on Internships.com. I wasn’t expecting anything to come of it.

I applied for a WordPress internship and got the position pretty quickly.

I began writing articles for WordPressInterns.com, and I was stuck getting up at 5 AM every Tuesday and Thursday, and 6 AM on Saturdays.

Just when I thought I had way too much on my plate–writing (WPI) and going to meetings (also WPI) and working on gaming articles (Gamers Decide) and editing books (tea client) and editing e-mails (Fiverr) and writing blog posts (writinginbedagain), all in addition to maintaining this Tumblr–I got asked to try a different position related to my internship.

I became a contracted content editor/content strategist. For the past couple of months, I’ve been delegating work for Alpha Beta Commerce’s blog.

If things go well in the next month or two, it will be a full-time job.

When I got stressed out by the early-morning meetings, I dropped the ball on my gaming articles. I almost quit my internship. I was really, genuinely thinking about it. And that was exactly when things started to get better.

So right now, I’m still doing all of this stuff, except for the work for writinginbedagain at the moment.

Last year, at this time, I had to do a minor surgical procedure and ended up causing a lot of (unrelated, sort of) grief for two people I really cared about.

My life was a chaotic mess. (self-harm TW)

I attempted suicide in August of 2014.

Luckily, I was stopped before I could even break skin. I couldn’t promise that I wouldn’t try again. I got dragged by the arm into the living room and ended up with rug burns on my butt that stuck around for longer than a month.

I’d secretly planned to try again in December that year and had spent many nights staring at the ceiling with the realization that all I had to do was go to the kitchen and grab a knife while everyone else was asleep.

In April of 2015, I was forced to promise not to self-harm in any way. I haven’t since.

It does not matter how hopeless things seem.

It does not matter how many times you plan out your death.

It does not matter if someone is trying to get you fired.

It does not matter if you have no idea how you’re going to pay rent or afford to eat.

It does not matter if you are waking up at 5 AM for 10-minute meetings.

It does not matter if you are suddenly out of a job.

None of that matters.

It will always get better.

And pick up a pen.

Make something of yourself.

I suddenly had to come up with nearly $400 every month.

And I’ve done it, despite the odds.

If you want it enough, then you will find a way.

I had no prospects whatsoever.

But I picked up a pen and started writing proposals for working with people.

I have 10,000+ wonderful, amazing, beautiful followers.

Thank you for being one of them.

It’s scary when you think no one is interested in what you have to say. I still feel that way all the time offline. Really.

It sucks. People interrupt me all the time.

But here? This is my platform for changing people’s lives.

I have the opportunity and ability to reach people through this blog.

I am here to stick out my hand and tell you to grab on.

But it will get better. Always.

#writeinspiration #this #what a journey #it gets better! #bunny

random-stuff-thrown-into-a-pot’s tags are awesome, and I appreciate them :3