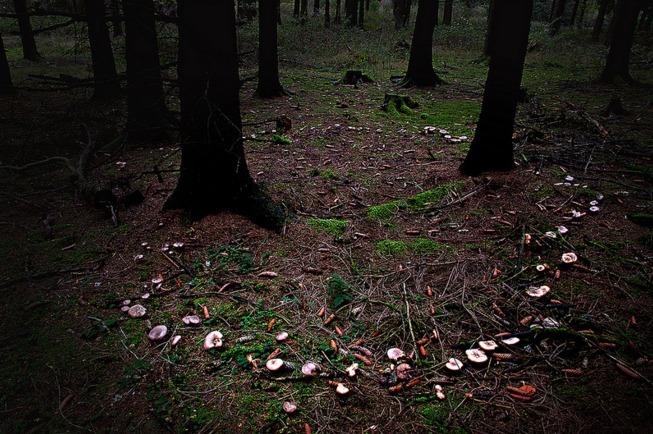 Fairy ring folklore can be found through out Europe. Each has some element of metaphysical or magikal undercurrent. One of the first appearances of fairy rings comes from German-speaking Europe. Fairy rings were known as hexenringe or “witches rings”. These rings were created by witches gathering and dancing in the forest for pagan rituals. Their energy left behind would create a ‘fungus’ and mushrooms would grow in their place. Many locals would see this as a warning sign, and avoid the area.

In English folklore, mushroom rings were also known as fairy or pixie rings. These were caused by fairies or pixies dancing in a circle. As they wore down the grass, they left a circular pattern of basidia (a type of mushroom) behind. Toads would then sit on the mushroom and poison them, creating a ‘toadstool’.

In Scandinavian folklore, these circles were created by elves. Like the English legends, they were created by elves dancing in circles leaving their magikal presence behind in the form of mushrooms. Various folklore stories call these rings gateways, or transporters. Some describe these as doorways into the fairy world. Others tell tales of these rings transporting people who mistakenly walk into their circle, taking them to far off places or strange lands. Others tell of taking unwary people to the same place, but in a different time.