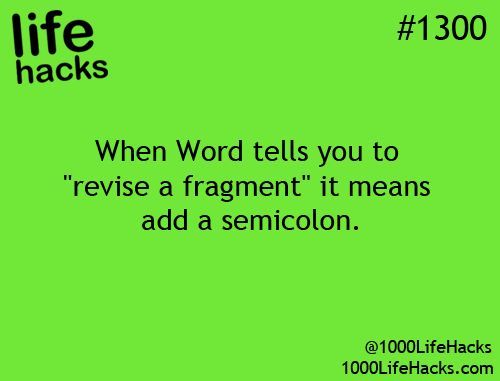 Do not freaking do this.

I don’t know who decided to lie to you on this day. But they are lying.

Semicolons are ONLY for complete thoughts. If you have a fragment, then you need to give it a subject and/or predicate.

A fragment is an incomplete thought. A semicolon cannot save you here.

This advice is so bad that it is almost physically painful for me to look at.

Lemme fix this for you.

If you have a fragment that needs revision, you need to figure out if it’s missing a subject or a verb. Then you need to provide it with one.

Problem solved. That’s it. That’s all you have to do.

Okay, let’s take these random examples from the top of my head and turn them into real sentences!

Subject: a noun or a gerund (verb that acts like a noun) and its objects

Predicate: a verb and its objects

Verb: action word that tells you what the heck is going on

Preposition: gives you specifics (please don’t use this definition; this is just the basics in terms of fragments, okay?)

“went to the store” is the predicate.

“to the store” is a prepositional phrase that acts as an object for “went.”

So what role do semicolons play in all this?

Semicolons have very little to do with fragments, if anything at all.

“I went to the store; I bought beans.” = CORRECT semicolon usage

On EACH side of the semicolon, you HAVE to have a complete thought. It has to be capable of standing on its own as a sentence.

Yes, the other side will provide context and clarification, but in a grammatical sense, it has to be a complete thought/idea.

“Love phones.” = fragment, because it has no subject. Who loves phones? Is it you? Your friend? Your dog? We need to know who is doing this.

“My best friend.” = fragment, because it has no verb. What about your best friend? Why should I care? What is your best friend doing? (“How are they doing it?” = important question but technically unnecessary to answer, in a grammatical sense)

“I went to the store” and “I bought beans” are both complete sentences, right?

(If you answer “Who went to the store?” with “Me,” then you’re answering with a fragment, since it has no verb. While this is understandable in dialogue, it is generally unacceptable in formal/academic writing.)

Those four questions are answered quite easily. The information you need is contained in each of those two sentences. Therefore, you can combine them with a semicolon.

The semicolon connects two complete thoughts that are related to each other.

By itself, “I bought beans” is kind of ambiguous. Who did you buy beans from? Where did you buy the beans?

You know that you didn’t trade for the beans, or that would have been specified. But with “I went to the store,” we know that it was a legal transaction made with money at what we can presume to be a grocery store of some kind (or convenience store or mega-store).

So why do we need to include the beans in the sentence about buying them? Saying “I bought,” while it has both a subject and a verb, isn’t really a complete thought. It is unclear and confusing and doesn’t sound right at all.

Even if you’re not great with grammar, syntax, or anything else like that, you can say it out loud. If it doesn’t sound right, you might want to re-word your sentence or look up what you’re missing.

Okay. So that’s my rant. Educate yourselves. Don’t just reblog stuff that sounds good and makes it sound like you have an easy fix.

Think about this:
It just says to add a semicolon. Where? Why?
How would a piece of punctuation fix something that’s being pointed out as a fragment?

And for the love of all that is good and holy, don’t just add semicolons because you want Microsoft Word to stop with the stupid squiggly lines.

Feeling generous and want to thank me for my work on this blog? Then please click here and donate to me via PayPal!

You can also become a patron of me on Patreon.

I edit blog posts for $5 each via Fiverr. I’d love to help you out!

Don’t have a dime to spare? That’s totally fine! 🙂 Thanks for your support~!