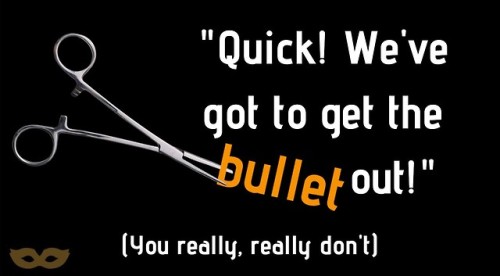 Taking the bullet out does nothing to help the person, and if your characters are in the field instead of a hospital, may actually cause more harm than good.

Imagine for a moment that you (for reasons unknown to all) decided to turn your sink on wide open, pick up a handgun, and shoot the pipes under your sink.

Maybe it hit the drain pipe, which would be bad, since all the water coming through the faucet is now dribbling out all over the floor. But even worse would be if it hit the water intake pipe, right? In that case, water under high pressure would be spraying everywhere!

Two bad options if you for some reason shoot your sink:

But back to the sink example. Say you shot the pipes and hit the drain pipe (vein). Now there’s water pouring out onto the floor. Your roommate says “Quick! Wrap your hand around the pipe to hold the water in!” (“Put pressure on the wound!”) And you do! Water is still slipping out from under your hand, but it’s leaking a lot less than before! Right now, you COULD find some duct tape (bandages) and secure the pipe further so you don’t have to keep holding it.

Instead, however, you say to your roommate: “Hold on! I’ve got to find the bullet!” You let go of the pipe (stop putting pressure on the wound) to dig around in the cabinet (body) for the bullet. Seconds, maybe even minutes pass, and that pipe is freely gushing out water the whole time.

Finally, you find it! You pry the bullet out of the wood, hold it up to your roommate, and drop it in a little metal dish with a ‘clink’.

“Job well done,” you tell yourself. “We’re out of the woods now.”

Except that, you know, the pipe is still damaged and gushing water out onto the floor, and the bullet wasn’t actually doing anything harmful inside the cabinet. Also, while you were rummaging around for little Houdini, you weren’t putting pressure on the pipe, so that sink (patient) lost a whole lot of water (blood) that it didn’t need to. Can you imagine how much more it would have been if you’d hit the water intake pipe (artery) instead?

I know what you’re thinking. “But in movies—!!” And I know. But here’s the thing: Hollywood? It’s a bouquet of lies. I’m sorry. I really am.

In fact, even that distinctly bullet-shaped thing you usually see pulled out of people in movies may not always be true. Many times the bullet mushrooms out or becomes malformed. Depending on what that bullet ran into (like bone) it might have even broken into a dozen pieces. Try digging those out of your protagonist!

Now sometimes, but not always, doctors WILL remove the bullet (or fragments of bullet). For example, if they’ve already got the patient in surgery, and AFTER they’ve already repaired any veins, arteries, and organs to the best of their ability. Or if the patient doesn’t need surgery (if it didn’t hit anything major and is just lodged in the muscle or fat) but doctors notice that the bullet or fragment is likely to cause damage if left inside the patient.

More often than not, however, the bullet isn’t doing anything actively damaging while inside the patient, or the removal of the bullet would be more dangerous than leaving it where it is. This is why most bullets don’t get removed at all.

This is true if your characters are at a hospital, but ESPECIALLY if this is a field job. If trained physicians with all the tools at their disposal, blood transfusions, and a sterile environment most likely won’t take the bullet out, then Dave McSide-Character should DEFINITELY not be sticking his filthy, 5-straight-chapters-of-parkour fingers or his I-just-stabbed-a-guy-but-I-wiped-the-blood-off-on-my-pants knife inside the protagonist to fish around for some bullet that isn’t even causing harm. The recommended way to deal with a gunshot wound in the field? Pack it with gauze (or yes, even a filthy we’ve-been-on-the-run-for-two-weeks-in-the-same-clothes t-shirt if that’s all you have. Wound infection is a different post) and keep constant pressure on it.

Remember: stopping the leak in the sink is the most important thing. Not rummaging around in the cabinet for the bullet. Taking it out does literally nothing.

Two perfectly realistic reasons why you might have a character take the bullet out:

Now, sometimes, depending on the characters or the world you’re writing in, this might be different. In some instances, you might want to write the lead-scavenger-hunt scene in!

The first reason is if they just don’t know

And that’s really important when writing realistically. Not everyone is a professional in emergency wound care. Most people get all their knowledge of emergency medicine from Grey’s Anatomy and House M.D.

And hey, maybe they’re like “I’m gonna get the bullet out!” but another character (the one who was shot, another character in the room, maybe even a 911 operator) steps in and says “No, no, no! Just put pressure on it!”

But regardless, injured characters in movies are always suddenly on the mend after the bullet is taken out. The vitals start to rise, they aren’t gasping for breath, their hand closes firmly around the love-interest’s hand, etc. And this doesn’t happen. Regardless of what your character does, the rules of biology are still in play.

In the end, though, that bullet’s just minding its own business in there. The #1 priority is fixing the damage it caused on the way in.

The second reason is if the bullet is special

This is more for the SciFi/Fantasy writers.

If your character is a werewolf and was just shot by a silver bullet which is stopping their healing process and is slowly killing them? Yeah, take it out

If the bullet is actually some sort of tiny robot designed to burrow into their organs one by one? Yeah, take it out.

If the bullet had a spell or curse placed on it? Yeah, take it out.

If they need to get transported up to the med bay, but the bullet would cause some kind of issue with the transporters? Yeah, take it out.

But in all of these examples, the bullet has to be inherently dangerous. For normal humans with normal bullets, its just a hunk of lead.

Hope this helped some of you action writers out there!

Disclaimer: In the event that you or someone you know has been shot, the best thing to do for them is call for an ambulance and follow the instructions provided by the operator. This post is intended to give accurate writing advice to authors and script writers, but I am not a medical professional. While I do believe that the research that I’ve done on this topic is factually accurate, it should not be taken as actual medical advice.

I’m a mystery writer and this is helpful for me. Thanks Kristen for posting this.