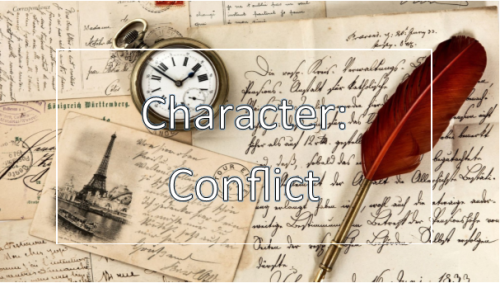 There are several reactions to conflict that you can use in order to create character, but I am just going to stick to three: submit, use logic and get angry. I have used extremes to illustrate the lengths you can use with these reactions.
Submit
Put simply your character lets it go. They let the other person get away with any misdeeds and wrongdoings that your character suffered from. Often this character avoids conflict as much as possible and finds themselves suffering from the hands of others. Your character could grow and react differently as the story goes on to show character growth, but you could also let them fall into despair with all the problems that they could have prevented.
Use Logic
Using logic to put forward a reasonable argument characterises your protagonist as careful, objective and rational. I often use this reaction in a character who values objectivity over emotion and investment in the conflict. This kind of reaction can cause your character to be a cold logician often lacking emotional investment in the conflict of your story. This can cause a bit of a disconnect between your reader and your character, but with the right conflict, your character will be forced to react differently.
Get Angry
This character is brash, impulsive and are based on emotion. Your character, instead of submitting, forced the other person that they are in direct conflict with to submit instead. This can be interesting when your character is faced with another that has the same type of reaction and could create a fresh dynamic. As well as this your character could lack the objectivity of the using logic or the peaceful nature of the submitted character showing a whole new range of emotions.

Often your character won’t always stay on one reaction as they will then become a surface level character, pulling any complexity that they could have had. Instead of this your character will instead use all three in different situations; showing what is important to them. For example, your character might submit when in conflict with a loved one, rather wanting peace rather than tension. That shows that family is important to them. They want nothing but to keep their family close to them even it means if they suffer. Maybe they Get Angry when someone disrupts that peace, lashing out on those threatening the peace in their family that they have suffered for. See! You get a motivation and a well-rounded character by using this concept.

Questions to Ask Yourself About Your Character

– When faced with specific conflict how do they react?
– How does your story force your character to change their reactions for character growth?
– What is their preferred reaction to conflict?
– What are the stages or first reaction and second reaction when they start to get desperate?

I hope this was helpful! Have a lovely Monday (if you can)!